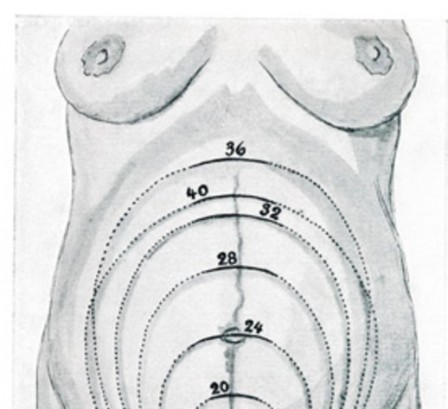 This is an article regarding an unpublished study that was designed and conducted in 1981, but publication in time was not possible due to the workload in the busy practice of the author. Temperature changes on the abdominal wall could be caused by nociceptive sensations in the viscera which are transfered to the surface via viscerocutaneous reflex pathways. Two aspects play a role in this:

* AIM of the STUDY The aim of the study was to investigate if infrared thermography can measure temperature changes associated with the functional status of a pregnancy. The null hypothesis was: during the course of pregnancy, there is no difference in skin temperature between the skin areas selected.
METHODOLOGY:
The occurrence of viscerocutaneous reflexes was investigated by means of infrared thermography in a group of pregnant women who were cared for in a general medical practice.This observational study started on the first visit for a pregnancy check-up and at every check-up visit, the temperature was measured. Because the check-ups were scheduled by the doctor based on indications or on woman’s request, the number of measurement differs among women. We used a linear mixed-effects model to model the difference in temperature between the genital zone and navel zone, with week and complaint group as fixed effects.
INTERVENTION:
On four areas of the abdominal wall, infrared thermography temperature measurements were taken on the abdominal skin.
RESULTS:
During pregnancy, a significant temperature difference developed between the genital zone and the navel zone (t=-6.019), caused by lower temperature in the genital zone that became visible approximately in the 34th week of the pregnancy.
CONCLUSIONS:
The null hypothesis should be rejected. Infrared thermography seems to be able to measure the viscero- cutaneous consequences of a visceral process on a physiological level. The investigation with pregnant women reported in this publication is relevant for two reasons, because the evidence based data show that: 1. Infrared thermography can play a role in the detection of processes in the viscerum. 2. Chronic pain of the abdominal wall cannot be an isolated entity. This confirms extensively documented literature published previously. Abdominal wall pain continues to be a major problem medically, economically, and socially. Abdominal problems must be ruled out explicitly when searching for the location of abdominal wall pain. Differential diagnostics are a prerequisite for determining a specific solution.