You are on the start page of the scientific part. 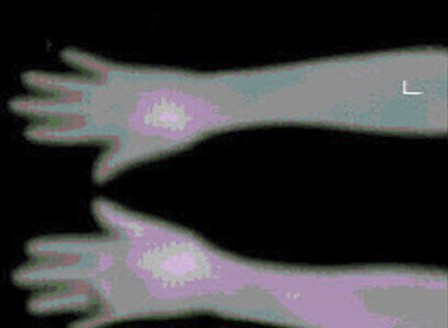 Infra-red image with pain without a known substrate. on the left side.

In this volume until January 2014 six publications will appear about research done in 1982-1986 including discussion and evaluation based on progressing insight from 1986 up till now. The background of publication is made by the realization that many patients who cooperated to the research can expect something back for their cooperation. Preferably by the regular and modern media but if that is not possible then only by this virtual way which did not exist yet in 1981-1986. These publications provide statistically tested conclusions indicating that chronic pain is not a subjective, elusive phenomenon as was and is always thought. The reason for publication on this site is partly situated in the circumstances that 25 years of research is seen as “obsolete”and not relevant (anymore) and as a result of this can hardly published in the traditional media anymore. Also the judging criteria for research to be developed have been tightened. Legal standards on how to deal with test persons and the written reporting have been drastically changed. Furthermore commercial aspects of the media and interest in “quotation indexes”play a role. Yet the results of the research are sufficiently interesting, still medically and socially relevant to be published. May the reader appreciate the value.