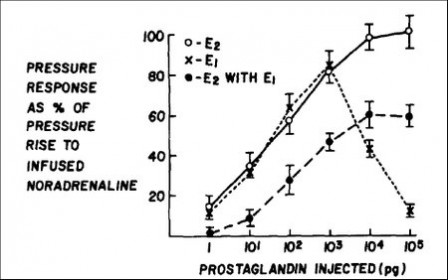 The original results of Horrobin and Manku from 1977.

These results are the basics of thinking about the genesis of CRPS from a location with chronic pain.

CRPS A contingent hypothesis with prostaglandins as crucial conversion factor.

CRPS is an acute pain disease expressed as chronic pain with a severe loss of tissue and function. CRPS usually occurs after minor injuries and then progresses in a way that is scarcely controllable, or completely uncontrollable. This article addresses the functional control mechanism of a biological organism, a comparison of techniques, and the way the negative feedback mechanisms fail in regulated feedback systems.

The measurement and regulation system is controlled at the local, regional, and central levels in a biological system.

Locally generated substances such as prostaglandins and hormones, as well as the central nervous system, play important roles in this process. Prostaglandins fulfil many conversion functions and are involved in vasoactive processes, pain, and inflammation. They play an intermediating role between the activity of the autonomic nervous system and local occurrences. The insufficiently explored conversion function of prostaglandins as a ubiquitously present cofactor may be related to the development of CRPS at sites which have had minor injuries in the past.

Relevance
Chronic Regional Pain Syndrome (CRPS) is a moderately prevalent disease, which occurs more frequently with age. Even though there are diseases known to have a precipitating effect on the aetiology of CRPS, for example Carpal tunnel syndrome, the mechanism of onset is unknown. The disease falls under the category of chronic pain, and seldom has an effective treatment based on scientific research. The economic and psychosocial aspects of the disease are substantial.

CRPS is the final position of a positive feedback measurement and control system.

Background of the hypothesis

Homoeostasis is directed by measurement and control processes. In electronics, a rapid conversion system, which quickly adapts to changing circumstances, superimposed with a delayed conversion system, which ensures a stable basis of homoeostasis. Measured changes are compensatorily controlled. An analogy is expected for a Complex Adaptive System such as a living organism. Hormonal systems are slow systems, suitable for stabilising activity. Neural reflex systems function quickly. Prostaglandins that come from local tissue may be the link between the slow and rapid control. In electronics, negative feedback can convert into a feedback loop which results in the dysregulation, which is what prostaglandins do in biochemistry. A feedback control mechanism only has two positions: a zero position and a final position. The process is not easily influenced by other factors. Only phase shifting and signal weakness can affect the ( end of the abstract)

__On this moment: 29 okt 2016 there are some hard-copies available for the scientifically interested reader. Send an email to the editor of this domain.__

They posted on the same topic